1) Recently, information and communication-based various service technologies, such as cloud, smart devices and IoT (Internet of Things) have been rapidly developed.

2) In addition, platform technologies of network equipment like routers, smart gateways, switches, firewalls which are required for this various technologies are being developed as well.

3) Development of information & communication technology enables users not only to overcome time and space constraints for the use of smart devices, but also to continue what they are doing in any other places including the office, home, school and to provide the same network environment as that of physical remote location.

4) Technology that is making the multiple remote networks to one local network can be implemented through well-known inter-network VPN (Virtual Private Network) equipment. Commercial VPN equipment has been evolved to provide the application of many advanced functions including not only basic router and tunneling functions, but also intelligent firewall including IDS (Intrusion Detection System) and IPS (Intrusion Protection System), QoS (Quality of Service) technology, multi-line support, and load balancing, etc.

5) These commercial VPN equipment are being used as high-performance products in a dedicated line environment with the support of experts.

6) Moreover, these are expensive and dedicated equipment due to their technical nature so that it is not easy to ensure for them to provide the compatibility between equipment.

7) Also as mentioned earlier, under the situation that small and medium-sized businesses and even the public increasingly require the need for the same network environment such as cloud, IoT (Internet of Things) and multi-screen, the need for the wired/wireless router to support inter-network VPN under general internet environment has been increased because application of dedicated VPN equipment to the expensive leased line environment is not economical.

9) Although several existing wired/wireless routers to support VPN exist, their simple VPN server functions only provide direct linkage to a PC or a smartphone not an inter-network VPN linkage.

10) Therefore, their utilization is decreased, the machine to support is limited and the speed rate is around 5 Mbps level. In addition, not only that it is not economical to popularize commercial VPN dedicated equipment, but that its operation is not possible without dedicated line.

11) Due to this reason, we come to propose below solutions to resolve the above problems

First, we propose a platform (Smart Gateway) to support VPN tunneling to the affordable cost hardware.

Second, we propose an implementation plan to support at least 20 Mbps for VPN tunneling rate for each tunneling algorithm through new platform (Smart Gateway).

Third, we propose a method for applying different-features, multi-queuing techniques via Smart Gateway beyond the simple QoS, ToS (Type of Service) methods by identifying real-time internet line situation even if the change of internet line quality is large.

12) Historic network-based equipment including routers, firewalls, and VPN equipment have been developed continuously even today.

Development of hardware performance itself is required, but development of software technology is further required in recent days not only for the proper responses to a variety of services and environment changes, but also for the need of popularization of associated network equipment to respond against explosive expansion of various services such as cloud, big data, and loT.

13) The hardware, operating system and software platform used in Smart Gateway of IOT-16300 are based on OpenWRT which many developers in the various network equipment fields have used for a long time.

The techniques of VPN tunneling-related solutions applied to Smart Gateway of IOT-16300 can be used in various network  equipment such as smart gateway application for loT.

Smart Gateway was developed for IOT-16300 and it is used for commercial purposes to control home appliances.

The Internet of Things (IoT) is the network of physical objects, devices, vehicles, buildings and other items which are embedded with electronics, software, sensors, and network connectivity, which enables these objects to collect and exchange data.

The Internet of Things connects devices and vehicles using electronic sensors and the Internet.

The Internet of Things allows objects to be sensed and controlled remotely across existing network infrastructure, creating opportunities for more-direct integration between the physical world and computer-based systems, and resulting in improved efficiency, accuracy and economic benefit.

Many of IoT training systems are so configured as to allow practice of on-board sensor control using a Raspberry Pi Module.

To control the on-board sensors through the Raspberry Pi Module, virtual IP is used, not through a commercial Cloud Server.

Therefore, it is not easy to practice remote control of various home appliances through Raspberry-pi based IoT training system.

Moreover, the Raspberry-Pi module does not provide the gateway function. Also, as for Cloud Server, as several virtual machines operate on a single Real Machine, there may occur some problems associated with the Virtual Server (e.g. the server might be inaccessible in case of DB shutdown, Max-Connect count over, etc.). Since several VMs operate on a single Cloud server and a large part of the memory is used by other VMs, connection fail can be occurred.

The Cloud server provides many advantages such as cost saving, customer support, convenience, etc. However, it is better to use an independent Real-Machine such as VPN Smart Gateway.

As the internet (networking) function is built into the Raspberry-pi module, power consumption is increased and networking cost is raised when the system is configured with several sensors (home appliances).

IOT-16300 is so configured as to allow practice of sensor control on the Arduino board through the VPN Smart Gateway as well as remote audio, TV, Video control using Raspberry Module.

2)   It is possible to practice control of various sensors on the Arduino platform through the VPN Smart Gateway and possible to remotely control the real (commercial) home appliances of Audio.

3)   From the OpenWRT platform, the Internet is useful for expansion of various functions and security such as WWW, IPCAM, firewall, VPN, etc.

(1) How to implement IoT (Internet of Things)

Subscribe to Cloud Server and can get ID & PW to use. 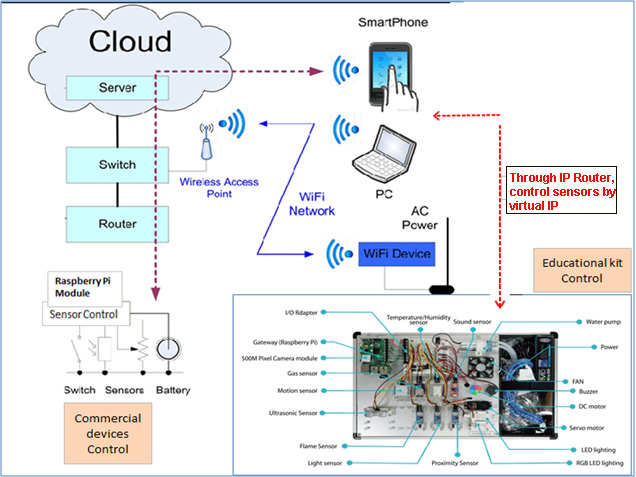 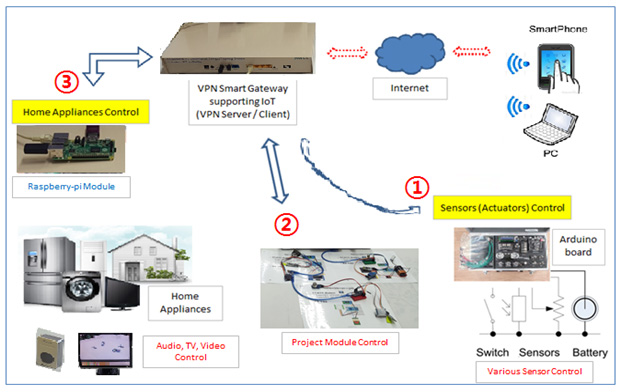 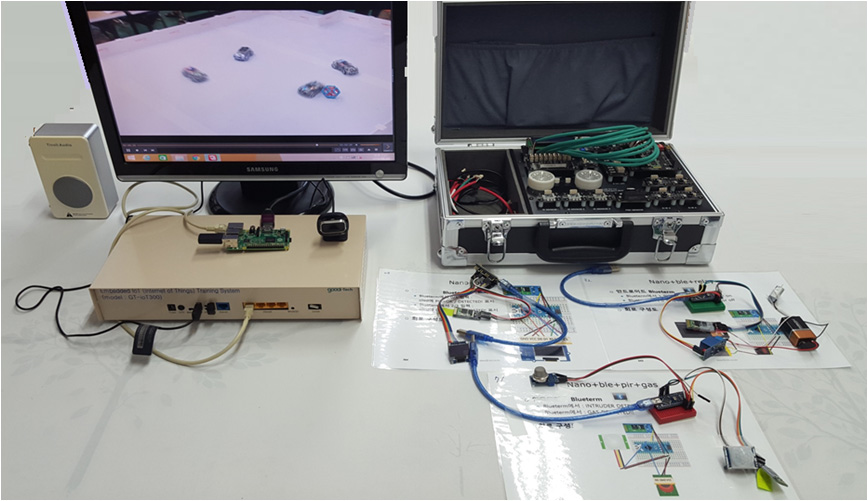 Chap 4. About IoT (Internet of Things)

2) 8-pc LED control to be connected to digital pin

4) Color LED control to be connected to digital pin

6) 7-Segment Control to be connected to digital pin

7) Crystal LCD Control to be connected to I2C

8) Light sensor Control to be connected to analog pin

9) IR Sensor Control to be connected to analog pin

11) How to utilize DC Motor